Where is it Mum? Remember, I gave it away. Why don’t you DIY?

A few days ago, my eldest asked, ‘Mummy, where is my marble run toy?’

Stretching out my hand, I encouraged him: ‘Why not make one yourself?’

I asked him to take a look at our Recycling materials shelf and he chose the kitchen towel rolls we had kept. Then I showed him some examples of DIY marble run images from the internet. He got the idea and started to work with hope. The rest came in eagerly to join in the fun. This idea is not new as we’ve done this before. What is new now- the boys are older to create one by themselves! : )

Both boys taped a few rolls to make into one long tube. Then we discussed which directions they wanted the marbles to run and figure out how to attach the tube firmly to the table legs.

A wanted a zigzag flow and that’s when he had to put on his thinking cap and we discussed about cutting a hole, and if he prefers to see the marbles rolling, he’d have to cut open the roll into half. We experimented on the angles and distance that would aid the flow of the marble by testing the marble at various position before the final conclusion above.

The little sister was eager beaver in trying out the runs and totally enjoyed the whole process!

Boys also had to try using different containers to  catch the marbles while taking into consideration the size, shape (square box works better than a bowl) and force of the marbles’ speed. They had to use the deep pink basket instead of a shallow box to catch the long tube run as the marbles would bounce off the shallow box. They learnt quite a bit of simple physics that day. 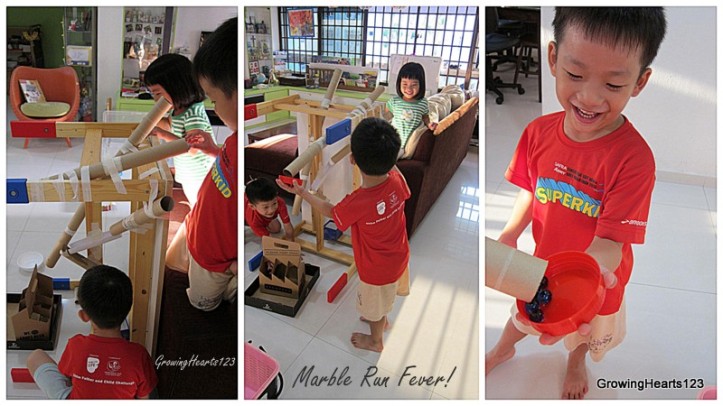 They were so excited upon completion and had a Marble Run Fever! 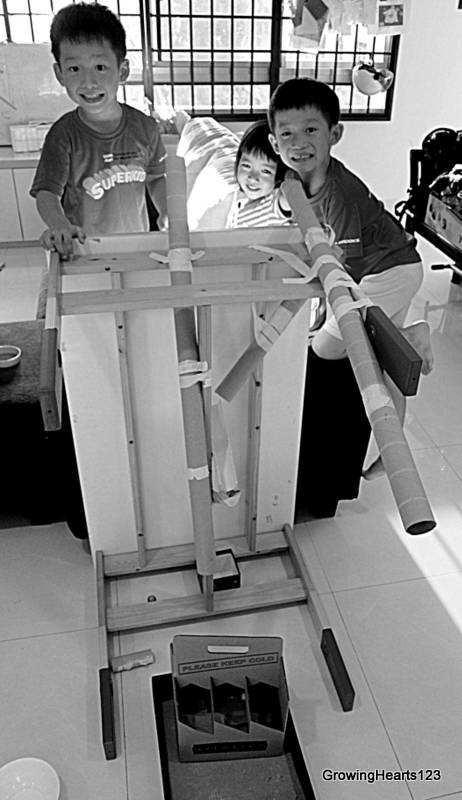 During our kids’ birthdays, the birthday celebrations we did for them were our way of giving them a gift. The gift of memories and meaningful relationships where we can enjoy and treasure having. We also guessed that others will lavish them with toys so we seldom buy toys for them. If we do, it’s simple and small inexpensive stuffs nothing fanciful.

Recently, we did our decluttering and gave away More toys. I only kept the ones they have been using within that year. The Marble Run toy was one of them. This gave me a great opportunity and incentive for all to make one ourselves! It really gave me great delight to see the kids get into action to create their own play. So, having less toys in this case meant more fun, more creativity and more learning! Am I glad that I had given away those toys?  : )  You bet.

Here’s a good read on Why fewer toys will benefit your kids.

Let’s give them the joy of creating some of their own toys! ; )