In the beginning, Superman met Wonder woman who decided she can’t fit into the role and became the Green Lantern Lady instead. (Read DC Justice League Run)

So Superman ‘Bobian’ (No choice), instead of racing together with hot Wonder woman he had to stick with Green Lantern Lady instead! ; P 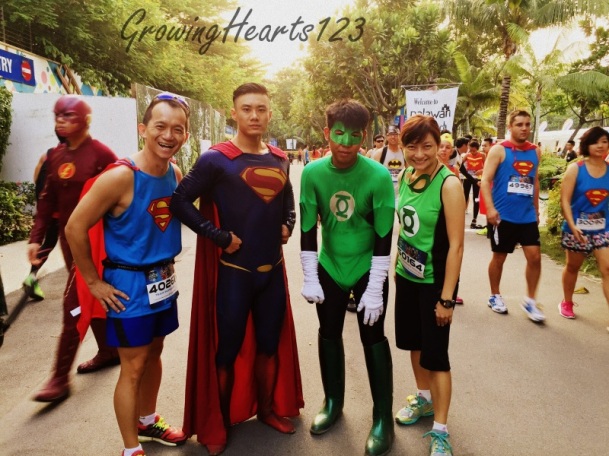 I was thrilled to have my hubby on board together in this race! Our first baby step to fulfilling our dream goal joining a marathon as a couple. We took photos together. I reckon this was the most photos of only the 2 of us together for the year or years? Most of our photos are we-fies of the family. In a sense, this event literally forced us to take photos of Just the two of us. : ) How romantic! ; p

My wacky Superman! He egged me to go up the trampoline while there were kids still playing… I refused. So he helped himself and I have a happy hubs fulfilling his I can fly dream as Superman!

He did however manage to convince me to let him capture my toilet usage…. hmmm…. Green lantern using green toilet lor….. So I obliged. ; )

After my Archilles Injuries in June, I started doing more serious reading on how to recover well and am determined to prevent further injuries.

This book that I borrowed from the Sports Library is a gem! I will be blogging more on the strategies in another post. Meanwhile, I tried doing a Run-Walk-Run method instead of my usual slow jog non-stop principle.

I ran for 7mins and walked for about 1-2mins and repeated the cycles until the finishing line. Hubs patiently paced just slightly ahead of me and encouraged me along the way. Turning back to accompany my walking.

We finally made it and clocked 39mins 40Secs! I’d say not too bad for a run-walk-run-walk strategy. : )

The release of endorphins from my race plus having my partner beside me to complete it left me in high spirits!

It is official and no surprise to many that Team Superman emerged the winner of the inaugural DC Justice League Run 2015 which was held earlier this morning. Taking place at Sentosa’s Interim Carpark, more than 5,000 runners turned up sporting the colours and gears, in support of their favourite superheroes, and were raring to go by the time the flag-off took place at 8am.

For the first time ever, competition surged between the Justice League superheroes, who are commonly known to band together to vanquish the forces of evil. In a bid to determine the fastest of the League, sides were taken as participants ran 5 KM to represent their respective superheroes, all but to bring honour and glory to the team.

Team Flash supported the fastest superhero of the league, or so they believed; Team Wonder Woman was all about girl power in their allegiance to the Amazonia Princess, Team Batman was outspoken in their support for the Dark Knight, and Team Green Lantern believed in the peacekeeper of the intergalactic Lantern Corps.

With an average finisher nett time of 31 mins 10 secs, Team Superman settled the age-old debate by proving that the Last Son of Krypton is indeed worthy of the title.

So Hooray to my SuperHero- Superman! That You will always be in our Yeow’s hearts. : )

What do you know? We were treated to superheroes juice packets! Am I glad to join this super fun run! Don’t play play, now we’re officially Justice League Runners. Heh. Such runs really add to the spice of running as a couple in this marathon goal. : )

Do check out their Facebook for more information and hopefully there will be more of such runs in future!

How about You? Do you have a goal? Be it couple-time, health or dream that you want to pursue. Let’s work out our goals together! : )

Disclaimer: We were invited to participate in the DC Justice League Run. No other form of compensation was received. All opinions are 100% mine.

For more of GrowingHearts, come join us at our FaceBook, Or Subscribe by entering your e-mail in the box on the top right side bar to receive notifications of new posts by email.